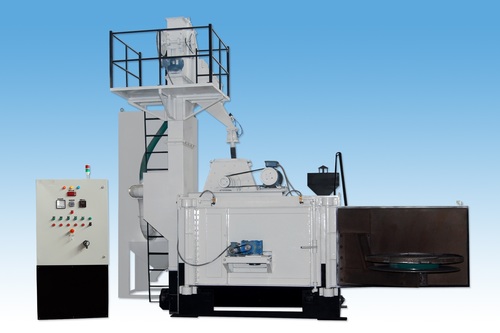 Once the machine is started, the blast wheel will come into rotation. No sooner the wheel attains itâ€™s maximum speed, the shots will be fed automatically through a Soundabrator Valve operated by a solenoid valve and pneumatic cylinder opening mechanism. These shots are propelled on the rotating components at high velocity thereby blasting them. Repeat the operation on second Turn Table.

After blasting, the shots fall down inside the hopper of the cabinet and are gravity fed to the lower screw conveyor. The screw conveyor conveys the shots from the cabinet to the boot of the bucket elevator, which in turns lifts the shots and feed them to a Separator Drum. The usable shots, unusable shots (fine) and heavy dust will be filtered through the screen and unusable shots (bigger size) and other big particles will separate and should be removed through refuse pipe time to time.

The shots, which have passed form screen, are subjected to an air wash system, which drains all the dust and broken shots. Only usable shots come in to storage hopper, which are re-cycled. The Fines and broken shots come to a refuse hopper and are rejected from the system through a refuse pipe. The dust collector absorbs the fine dust produced in the blast chamber.

The Dust particles generated in the system are collected in a number of filter bags in a dust collector. Clean air is exhausted through an exhaust fan. The Filter Bags are clean through by shaking Handle and the trapped dust particles falls in a dust bin and taken out for disposal from time to time.